Congratulations to Fran and Sophia in Year 8 who received the a Highly Commended award in this year’s Bishop’s Art Prize.

My artwork had evolved from a single frame, to a series of images as progress went on, as my message couldn’t be portrayed in a single picture. I created a short story/video about two opposite individuals, one who seeks belonging and one who seeks to give that to them, that symbolises the Lost Sheep. At the end of the cartoon, the colourful girl was successful in gaining trust of the monochromatic individual. The clouds and stars remind a viewer of the fact that this was based on a biblical story (and the clouds remind me of sheep) and that God always seeks out and welcomes those who need it. 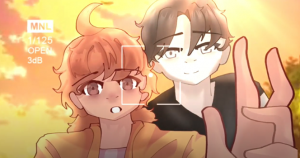 THE PERSISTENCE OF PROTESTS

My Artwork “The persistence of protests” is based on ‘The Persistent Widow’ (Luke 18:1-8), a parable about persistence and prayer. My painting is of Leetona Dungay, the mother of David Dungay, an Aboriginal man killed by Australian police while in custody. She has been fighting, grieving and protesting for over 5 years for the death of her son. The collage in the centre is of just a few of the 475 Aboriginal people who have died in custody, showing that Leetona is fighting for a greater cause than just her own, and that Black Lives Matter is relevant not just in America, but in Australia too. Last year after my family visited the Sydney Art Gallery, we saw and joined a Black Lives Matter protest where I heard Leetona Dungay speak about her son’s death. Like George Floyd, Eric Garner and other victims in US police custody, David Dungay’s last words were “I can’t breathe” as the police crushed him to the ground. In my artwork I wanted to show that God is present today in the support that this modern day persistent woman has. God is displayed in the people who protest with this modern day widow for her cause. I used a blend of yellow and white paint in the background to symbolize God’s light, presence and righteousness in the current protests today. On my artwork I have the words from the Persistent Widow “Grant me justice against my adversary” which is almost interchangeable with David Dungay’s mother, Leetona Dungay’s words “I’m his mother and I want justice. I am going to fight until I live in a country where Black Lives Matter.” 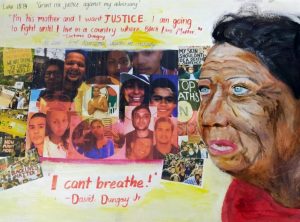